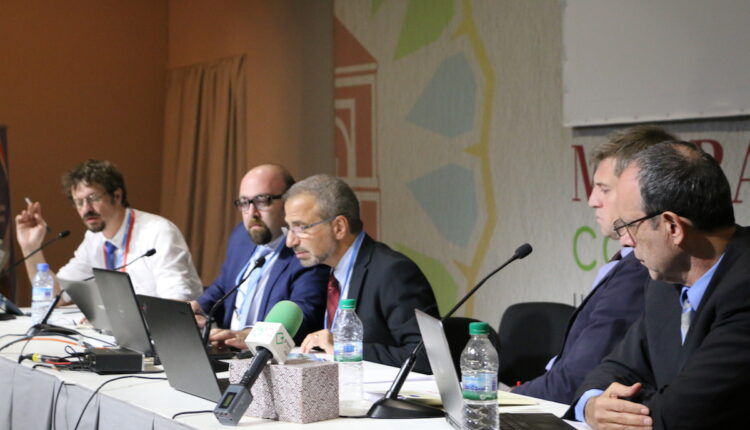 The Lebanese Ministry of Environment co-organized with the AUB’s Issam Fares Institute for Public Policy and International Affairs and UNDP a side event entitled: “Triangular climate action: harmonized efforts of businesses, NGOs and the Government”. The event, which was held at the COP22, focused on inter-sectoral collaboration between government, the private sector and civil society in Lebanon, was also supported by the EU–funded ClimaSouth project.

The aim was to provide diverse perspectives on cross-sector collaboration, between businesses, Government and civil society, and create an unparalleled opportunity to support business innovation and bring scale to the emerging low carbon climate resilient economy.

Vahakn Kabakian, Climate Change Project Manager at the Lebanese Ministry of Environment, stressed the importance of Lebanon Climate Act initiative, which was launched in June 2016. The initiative aims to deepen knowledge about the mechanisms to tackle climate change, and identify ways in which the private sector companies can contribute through the design and implementation of activities that will reduce their carbon footprint. Since its inception, more than 120 companies from the private sector and civil society in Lebanon have joined the initiative.
The Lebanon Climate Act initiative is implemented by the Green Mind Society in collaboration with the United Nations Development Programme, with the support of the Central Bank of Lebanon, and the ClimaSouth project funded by the European Union.

Bernardo Sala, team leader of the EU funded ClimaSouth initiative, pointed out that the project aims to promote dialogue and cooperation on climate change between the EU and the Southern Mediterranean countries. It supports the transition of partner countries towards a low-carbon economy and sustains the development of climate resilience. Sala stressed the importance Lebanon’s Climate Change Mainstreaming initiative which includes training workshops and online Clinique sessions, involving key sectors and strengthening a shared vision and dialogue in the run-up and in the aftermath of the COP22.

The LECB program is a low carbon pathfinder project that builds national capacities to design a strategic, long-term national vision for low emission development that is aligned with national development goals and acknowledges national circumstances. 25 countries, including Lebanon, benefit from peer-to-peer exchange of experiences and lessons, including the removal of technical, financial and institutional barriers to scaled-up mitigation action.

According to scientific reports issued by the Lebanese Ministry of the Environment in 2016, and related to climate forecasts, the average temperature in Lebanon will rise by 2050 to 1.7 ° Celsius, and to 3.2 ° Celsius by 2100. Lebanon is also suffering from rising sea levels and it may witness a decline in falling rains, warmer and drier summers and more extreme weather conditions, such as floods.

The tourism, agriculture and health sectors are among the most vulnerable to these conditions. In many cases, climate change will exacerbate the water and power crises in Lebanon as well as air pollution and other environmental problems. The scientific reports focus on the need that global emissions reach their peak in 2015, then return to their levels of 1990 in 2020, and then decrease to 80% in 2050.

The World Meteorological Organization has published a detailed analysis of the global climate in 2011-2015 – the hottest five-year period on record – and the increasingly visible human footprint on extreme weather and climate events with dangerous and costly impacts.

The Paris Agreement aims at limiting the global temperature increase to well below 2 ° Celsius and pursuing efforts towards 1.5 ° Celsius above pre-industrial levels. This report confirms that the average temperature in 2015 had already reached the 1°C mark. We just had the hottest five-year period on record, with 2015 claiming the title of hottest individual year. Even that record is likely to be beaten in 2016.

Installed solar power in Lebanon is set to double this year

New expansion of Beirut Port to transform the capital…

UN Welcomes Appointment of Members of the Lebanese…