How GDLRC is implementing the Roadmap to Build Land Industry in Lebanon ?

“Fiscal Policy Advisory and Reform” project comes as a result of the valuable partnership between UNDP and the Ministry of Finance (MoF), which started in 1994.

The new UNDP Project at the Ministry of Finance in Lebanon, launched in February 2017, aims to build on the previous projects in advising on economic policymaking, fiscal reform and management, and technical assistance through a highly qualified team of professionals, mainly Economists, Legal Advisors, IT, Project Planning and Implementation Specialists.

The Project at the Ministry of Finance was able to build capabilities at the administrative level, launch several fundamental reforms and support Ministers in crucial policymaking and reform efforts throughout the years.

During the next three years, the Project at the Ministry of Finance will support the treasury in innovative policies to contain the deficit, manage the debt, and reform the Land Registry and Cadastre administration.

It will also build on previous achievements in the Tax and Customs administrations towards a digital government.

In addition, the project will support the management of the concessional financing offered to Lebanon towards alleviating the impact of the Syrian refugees, and Lebanon’s commitment to reducing greenhouse emissions through green climate financing tools.

Finally, the project will help position the Ministry of Finance to better address the upcoming oil and gas sector needs from legislative, corporate governance, economic and fiscal sustainability perspectives.

At the General Directorate of Land Registry and Cadastre (GDLRC), the Acreage Books Automated System and the Vulnerability Patching procedures were implemented. New modules, considered as main decision-support tools to the administration, and a new information system for the Private State Land Division were developed.

A new project enabling the identification of property owners at Beirut registry office was developed, and a GDLRC Hotline support system was developed and implemented.

The GDLRC’s functional needs and requirements were assessed, resulting in the preparation of a Land Registry and Cadastre Reforms Project document, and a GDLRC business plan for 2017-2021. In this framework, support was provided to five World Bank missions.

Moreover, several laws, decrees and decisions to modernize the GDLRC were drafted.

On e-services, a new GDLRC portal was launched with the aim of increasing transparency and allowing access to information. Three e-services were developed, implemented and launched, to provide better services to citizens. Security of systems and premises was enhanced through issuance of identification cards for staff and real estate agents.

Also, a new Land Registry and Cadastre
Office in the Marjaayoun-Hasbaya region was inaugurated.
GDLRC Facts & Figures
The database covers :

•25 cazas (sub districts) •Around 1600 villages & cities
Property records are maintained in:
1. Registry books across 17 Registry Offices in Lebanon
2. Distributed Databases
•Database holds close to 3,000,000 properties •Database holds close to 24,000,000 Title Register records.
The Cadastre is mainly in charge of:
•Developing schedules for demarcation, drafting, land measurements and betterments
•Supervising works related to optional demarcation and drafting
•Monitoring the work of those considered by the GDLRC as its affiliated sworn surveyors or engineers
•50% of Lebanese territories are delineated and surveyed
•30% are delineated but not surveyed
•20% still need to be delineated and surveyed
During Planet Lebanon 2017 Conference Mr. Georges MAARRAWI, Director General of the GDLRC will introduce the new LRC portal 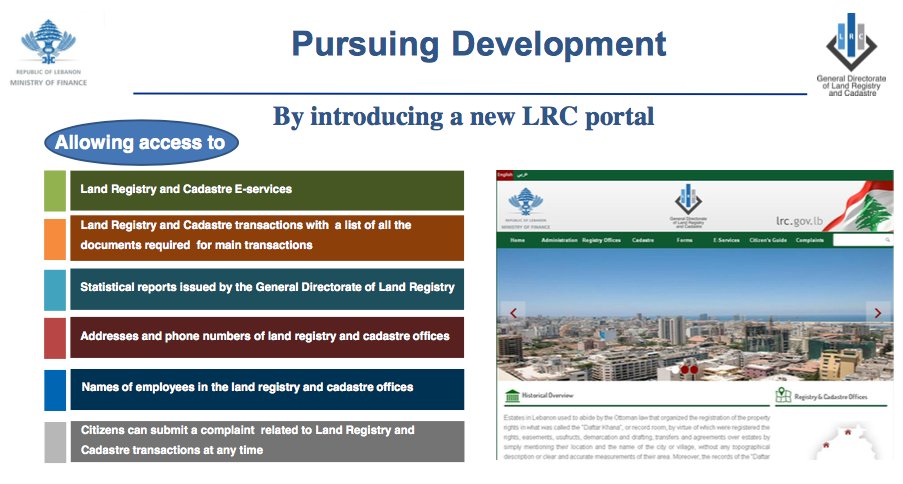 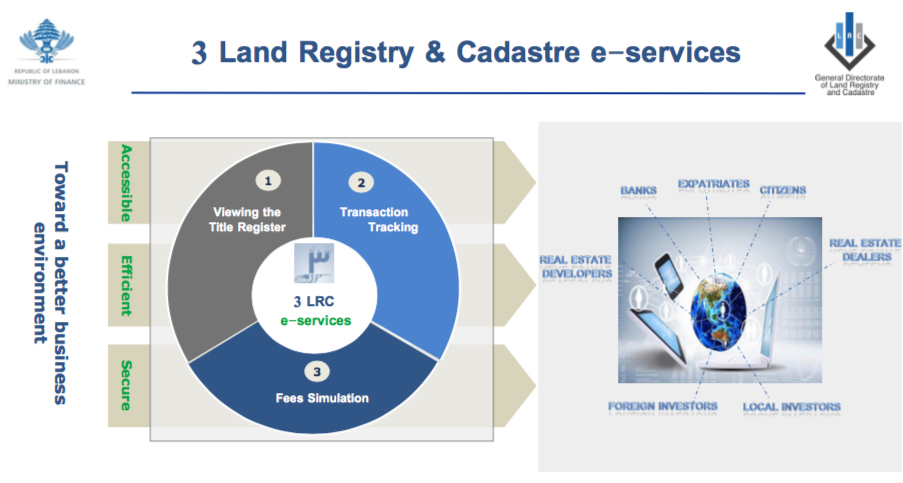 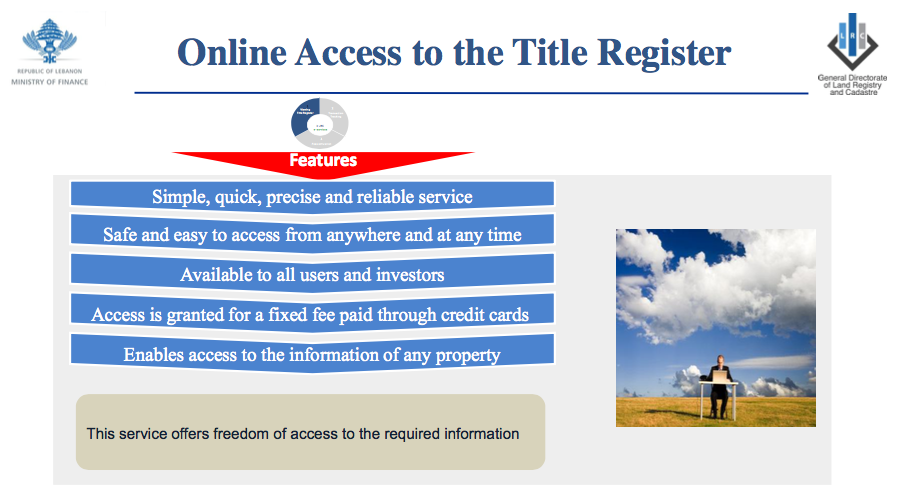 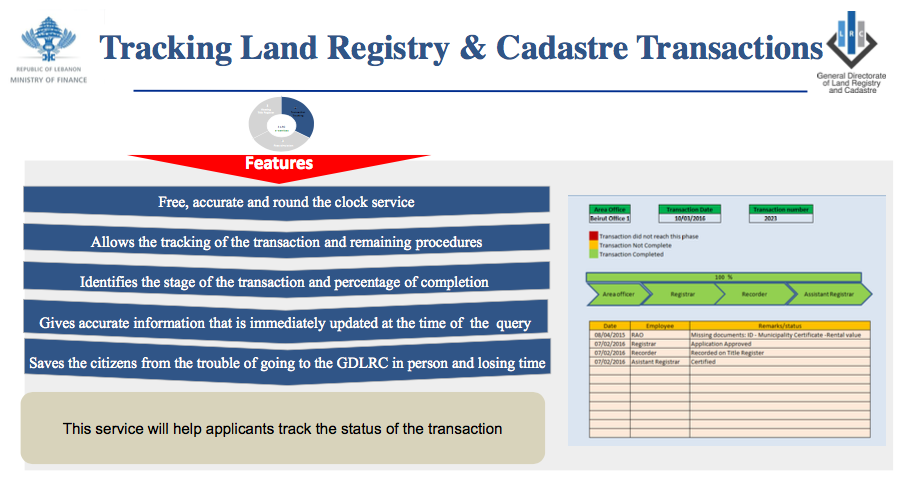 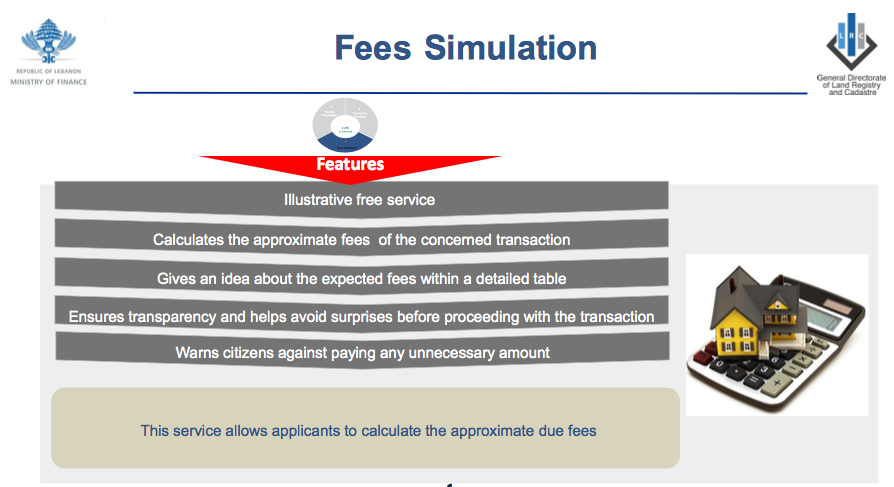 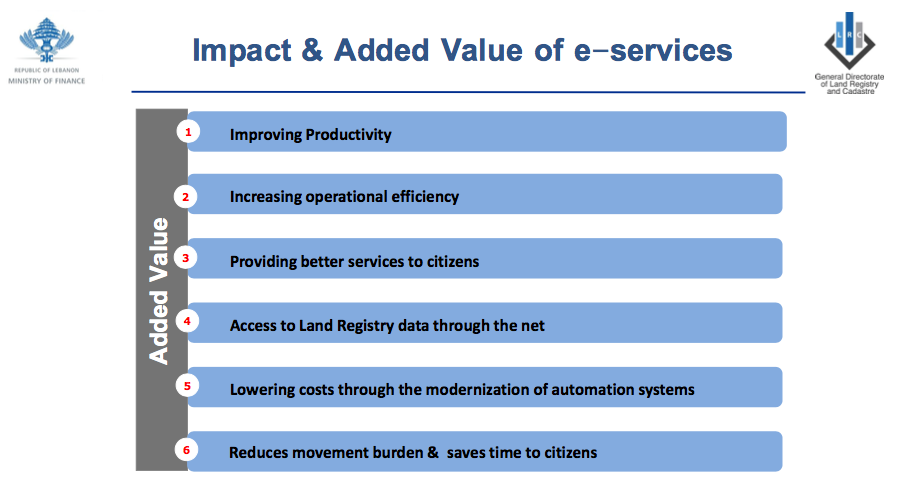 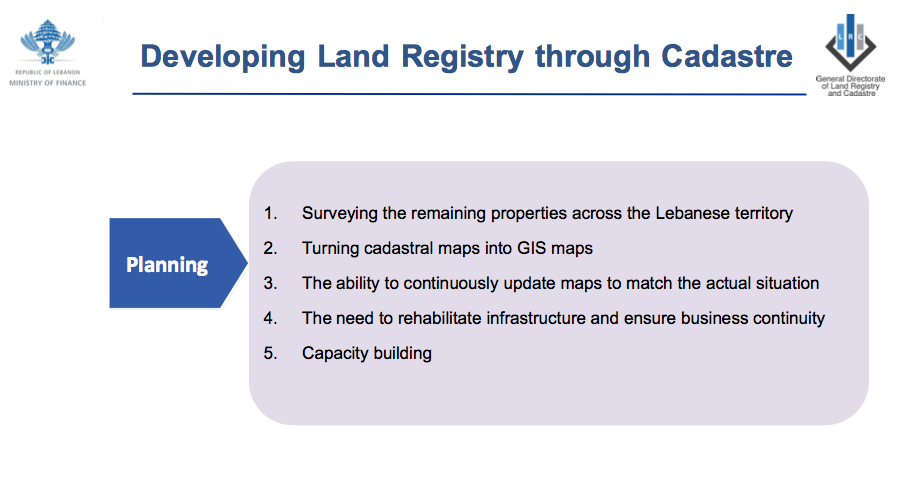 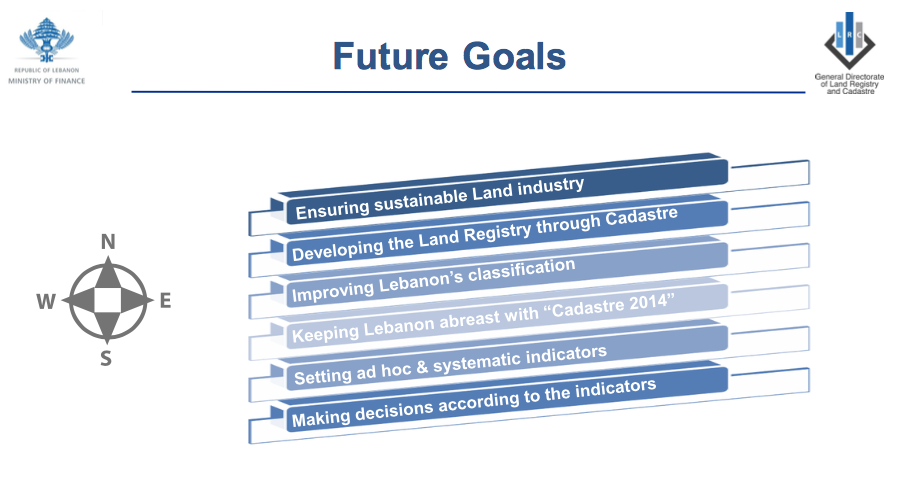