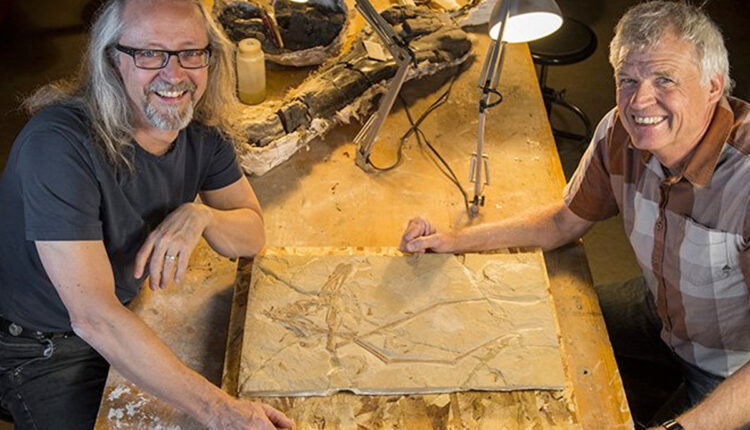 With the help of University of Alberta scientists, a newly described pterosaur has finally flown home. This spectacular fossil material was discovered in a private Lebanese limestone quarry more than a decade ago and has led to what UAlberta paleontologist Michael Caldwell calls “priceless scientific findings.”

“This is the first complete pterosaur from Lebanon and the very first pterosaur from this age of marine-deposited rocks,” says Caldwell of the new genus and species, whose name is yet to be revealed. The animal lived in the Cenomanian era — 95 million years ago during the lowest part of the Upper Cretaceous — in the middle of what is now called the Tethys Seaway, a vast expanse of shallow seaway filled with reefs and lagoons, separating Europe from Africa and stretching all the way to southeast Asia. “That chunk of ocean was huge — think 10 or 20 times the size of the Great Barrier Reef and chock-full of living things. I’m sure our little pterosaur was living on one of the reef islands.”

The extremely fragile yet nearly perfectly preserved fossil was split into two pieces when it was discovered in its slab of limestone rock. Though the limestone quarries leftover from the ancient oceans are famously filled with fossil fish, this is the first ever complete pterosaur discovered in that region. Besides a fracture to the skull from the pick axe of a quarry worker, the skull is intact, as are the wings, legs, and body. “It is in immaculate condition as a result of a lot of delicate preparation work,” says Caldwell. “We can really see how this animal was built. It’s a nice little piece of science and a great story about rescuing this specimen from certain doom.”

The University of Alberta has long dominated the field of vertebrate paleontology, and the quarry owner allowed a team of experts to prepare and describe the specimen with the intent that it would one day be sold — an activity that is legal in Lebanon. Caldwell teamed up with his University of Alberta colleague, dinosaur paleobiologist Philip Currie along with lead authors Alexander Kellner from the National Museum in Brazil and Fabio Dalla Vecchia in Italy. The group has described the new species and genus, and scientific results are forthcoming in a prestigious journal.

From one university to another
Following a decade of stewardship at the University of Alberta, the quarry owner recently sold the pterosaur. The buyer subsequently donated the specimen to the Mineralogy Museum at Saint Joseph’s University in Beirut — the oldest university in Lebanon — to become the centrepiece of their Lebanese vertebrate fossil exhibition.

For his part, Caldwell is pleased to see that the specimen will not only continue to be used for teaching and research but also that it will be publicly exhibited back in its home country of Lebanon. A cast of the specimen now resides at the University of Alberta.

This is how the new U.S. Embassy in Lebanon will look…