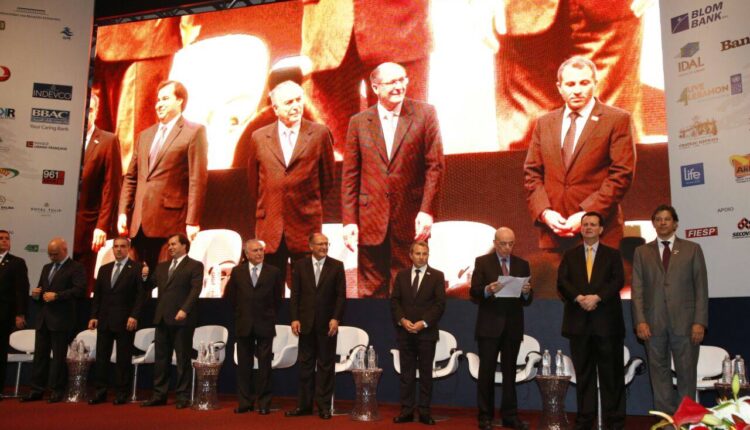 The country’s government and entrepreneurs held this Monday, in São Paulo, a conference to encourage Brazil’s Lebanese community to consume Lebanese products, and visit and make investments in the Arab nation.

Lebanon wants to mobilize the millions of Lebanese and descendants spread throughout the world to boost the country’s economy, and Brazil is one of the focal points of this strategy, since it hosts one of the largest communities of Lebanese descent in the world. Therefore, the Ministry of Foreign Affairs and Emigrants of the Arab nation held this Monday (28) in São Paulo, the Latin American edition of the conference Lebanese Diaspora Energy.

One of the initiative’s goals is to convince members of these communities to consume Lebanese products, and visit and make investments in the country. “There are many Lebanese products that you like and could consume, but that don’t make their way to Brazil,” said the Foreign Affairs and Emigrants minister Gebran Bassil, during the panel “Buy in Lebanon: the Latin American markets to Lebanese products” at Monte Líbano Club.

In the same panel, the president of the Arab Brazilian Chamber of Commerce, Marcelo Sallum, talked about Brazil’s trade with Arab countries in general and with Lebanon in particular. “We need to balance it out,” he pointed out, after mentioning that Brazilian exports to the Lebanese market totaled USD 287 million in 2015 while imports totaled only USD 23.8 million.

Among Arab countries, Lebanon comes in 11th in the destinations ranking for Brazilian products, while standing at the 12th position as supplier. To Sallum, there’s potential to expand sales of fertilizers from Lebanon to Brazil, since the Brazilian market is a major importer of this class of products and the Lebanese already have a share of this demand.

However, he highlighted the importance of diversifying the trade list.

“There’s plenty of room to work the less representative items, and Lebanon has the means to export them,” he added. Fertilizers are by far the main products shipped from Lebanon to Brazil, but there are small-scale exports of beverages and foodstuffs.

However, Lebanese Patrick El Kallasy, owner of Kallasy Group, said that he’s been facing difficulties to place his products in the Brazilian market.

He said that he’s been trying to export dairy products to Brazil for 10 years already but that tariff and non-tariff barriers make it difficult, preventing business. According to the business owner, the taxes charged on his products can reach up to 65%. “We want these taxes to come down, or to be abolished,” he said.

In this sense, there have been ongoing talks on a free trade agreement between Lebanon and Mercosur. The president of the Brazil-Lebanon Chamber of Commerce, Alfredo Cotait, is a supporter of the initiative and asked for minister Gebran Bassil’s efforts for the treaty to be signed as soon as possible.

Bassil replied that the discussions are ongoing but that to speed them up is difficult since there are six countries involved (Lebanon, Argentina, Brazil, Paraguay, Uruguay and Venezuela). For comparison, a similar agreement was signed by the South American bloc and Egypt in 2010, but it still hasn’t come into effect since the Argentinian parliament has yet to vote on it.

Stands offering products for tasting at Monte Líbano Club
“There are many Lebanese products that should be here, such as dairy products, honey, olive oil, and you can make a difference as consumers.

If you buy a beer or wine bottle, you would be making a difference, since there are millions of consumers,” added the minister. Some of the products could be tasted at the stands set up at Monte Líbano Club, such as beer 961 and Lebanese wines.

Kamal Mouzawak, founder of the organization Souk El Tayeb, which promotes the products of small farmers and the Lebanese cuisine traditions, argued for a connection between Lebanon and the diaspora through its cuisine. According to him, descendants of the immigrants might not dress as Lebanese, know the music, share the same religion, but usually share the same taste for Lebanese recipes. “Food unites us,” he said.

A partner of jewelry stores Antoine Saliba World of Jewelery, Joe Saliba, said that the demand for Lebanese products abroad is growing and that Lebanese “have a taste for beauty and design”, features they apply to things they produce. “I can say: the Lebanese people won’t disappoint you,” he said.

Marcelo Sallum, from the Arab Chamber, also made many suggestions to expand economic relations between Brazil and Lebanon, such as the progress in negotiations between Mercosur and the Arab country, the simplification of port red-tape, the abolishing of tariff and non-tariff barriers, organization of official and business missions, encouragement to the works of bilateral business councils and chambers of commerce, discussions on agreements for investment promotion and to avoid double taxation in bilateral business, trade promotion actions such as fairs, business matchmaking, products tasting events, among others, and support for the initiatives of the Summit of South American-Arab Countries (ASPA).

Image
Earlier, the vice-president of Foreign Trade of the Arab Chamber, Rubens Hannun, mediated the panel “Diaspora Contribution in Latin America”, where he presented the results of a survey conducted last year on the perception of the Syrian-Lebanese community by Brazilians. The evaluations were mainly positive.

“The community is widely welcomed [in Brazil] and is welcoming too,” said Hannun. Arabs are seen as hard-working people, respectful and friendly. “Very few of the people interviewed linked the Arab community in Brazil to wars and extremism, [this image] doesn’t hold up,” he added, making a reference to the wide coverage of the press about the Middle East conflicts.

The event was attended by personalities of the Lebanese community in Latin America, such as the congresswoman from Uruguay Laura Dergham, Brazilian advertising executive Roberto Duailibi, Théa Trabulse Namour, president of São Paulo cardiology center Hospital do Coração, Vera Jereissati Haddad, president of the Child Care Association Cedar of Lebanon, Elizabeth Camasmie Zogbi, president of Charity A Mão Branca (which cares for the elderly), and Salvador Villazón Salem, from the International Medical Lebanese Association in Mexico.
The vice president of Marketing of the Arab Chamber, Riad Younes, mediated the panel “Success Stories.”

Location-Based Services – The Next Technology Evolution…