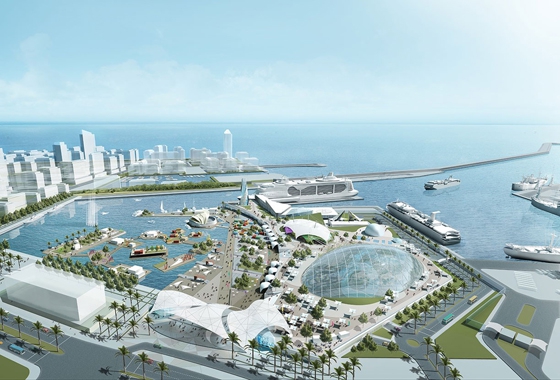 The Dar’s work on the port also included supervision of the building of a container terminal, 5 administrative buildings over an area of 18,000 m2, a 10,000-m2 warehouse, a parking area for 700 cars and 250 container trucks, and a 2,000-m2 park. Moreover, we supervised the construction of a detached breakwater and provided design office support.

The port has been made more effective and capable of accommodating the traffic that it faces.

The project has also aimed at creating a community-oriented venue on the waterfront that acts as a catalyst for regeneration of the port and the City of Beirut and accelerate the City’s transformation into a Mediterranean Cruise capital.

An international benchmarking exercise of best practice in waterfront development started the design process. This included waterfront regeneration projects in Europe and the Mediterranean, flexible land use mixes for urban cruise port terminals, cultural and entertainment zones on the water, community activities (including markets, events and exhibitions) and a palette of architectural moods and landscape themes, including industrial, maritime and contemporary.

Within this project, there’s a plan to not only develop the port to accommodate cruises, but to actually transform Beirut into a Mediterranean Cruise capital.

The area will be developed to accommodate a flexible use of the land. This includes urban cruise port terminals, cultural and entertainment zones on the water, and community activities – including markets, events and exhibitions.

Design elements include decks, pedestrian bridges, observation platforms and shelters, features such as light towers, and recycled materials such as reused containers and industrial elements.