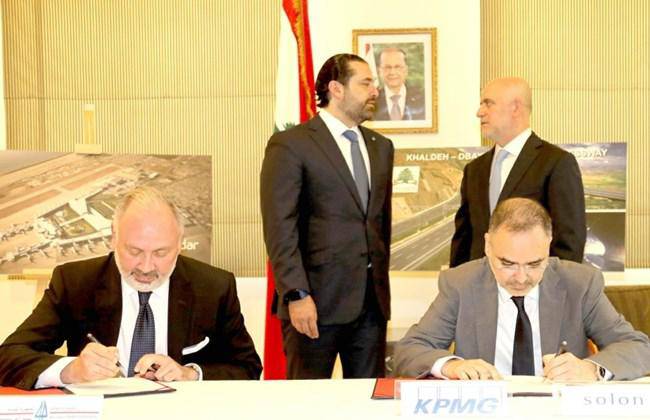 The Higher Council for Privatization and Public-Private Partnership signed consulting and advising contracts with major international companies Thursday in a key step of the implementation of the Capital Investment Program presented at CEDRE.

The CEDRE conference held in Paris in April garnered over $11 billion in soft loans and grants from the international community to support Lebanon’s ailing infrastructure and economy. The international support is also aimed at helping Lebanon draw further private sector investment, a key goal of the CIP.

“It is the first step in a 1,000-mile-long journey,” Secretary-General of the High Council for Privatization and PPP Ziad Hayek told The Daily Star. “We’re very happy.”

Agreements for three projects in partnership with the private sector were signed Thursday with the backing of Prime Minister Saad Hariri: the expansion of Beirut’s Rafik Hariri International Airport, the expansion of the Beirut-Okaibeh Highway, and the development of a National Information Center, part of the development of a common cloud-based infrastructure for the government.

Hariri said that the three projects amounted to more than $4 billion, according to a statement from his office. This was a figure anticipated to be mobilized through public-private partnerships in the first phase of the CIP ahead of CEDRE.

“We have big hopes for this work, especially for the success of our economic and social vision, in addition to creating job opportunities,” Hariri said from the Grand Serail during the signing ceremony. He added that cooperation with the private sector made up “the basis of the economy.”

Hayek emphasized that in the signing, another milestone had been reached in the first-ever application of Lebanon’s new PPP law. “The importance of these [agreements] is that these projects are being launched under the PPP law,” he said. “They’re the first ones to be subjected to it and … the PPP law is very important for us to be able to carry out PPP projects successfully, with transparency and involving all stakeholders.”

Hariri also underscored the importance of working alongside international donors in implementing the CIP. “We are cooperating with the World Bank, the European Bank for Reconstruction and Development and the International Finance Corporation, and this encourages us,” he said. “This is the confidence we seek to get from these institutions and what is needed today is to work together.”

Hariri said the airport project sought a target capacity of 20 million passengers. A high of 8.23 million travelers used Beirut’s airport last year, according to a study released by the airport’s research and studies department earlier this year.

The airport expansion project agreement was signed by Hayek and Muneer Ferozie, the regional head of PPP, privatization, and infrastructure financial advisory at the IFC, a member of the World Bank Group focused on the private sector in developing countries. Ferozie was quoted as saying that the project “entails improving the current airport infrastructure, expanding it gradually and attracting the private sector to design, build, finance and maintain the airport, through a long-term concession, which enhances passenger traffic and increases the commercial potential of the airport.” The Beirut-Okaibeh Highway expansion project agreement was signed by Hayek and Gretchen Biery, the senior adviser for Lebanon at EBRD. A third agreement was signed regarding the National Information Center project by Hayek and Nafez al-Morhabi, CEO in Lebanon at KPMG.

The agreements were signed just days before the current government goes into caretaker status until a new Cabinet is formed.

Hayek said that while further public-private partnerships will have to wait until a new government is formed, the accords signed Thursday should not be negatively impacted by the intergovernmental period.

“Today the first projects will start and hopefully will be followed by other projects in electricity, water and several [other] sectors,” Hariri said. “It is true that these are the last days of the government but I am optimistic that the future will be better.”