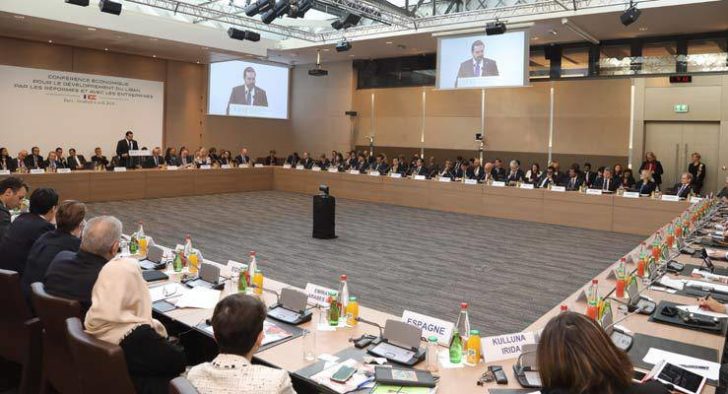 The CEDRE donor conference has resulted in $11.8 billion in pledges of financial assistance, out of which $11 billion are in soft loans. There were 51 countries represented at the conference in addition to international donor institutions.

The various loans are expected to carry a 1.5 percent interest rate over periods ranging from 20 to 30 years.

French President Emmanuel Macron said: “It is up to us to preserve the stability of Lebanon.”

“Starting tomorrow, we will start following up on the pledges made during this conference,” said Macron. “You can count on us,” he said.

The government requested funding for the first two phases of the Capital Investment Program (CIP) that is divided into three phases, each with a four-year schedule. The CIP includes 250 infrastructure projects worth $17 billion.

Around 30 percent of the investments will be earmarked for the transportation sector while water and sewage projects will get another 30 percent. Nearly 20 percent will be allocated to the electricity sector with the remaining 20 percent to be invested in other infrastructure and development projects.

The financial aid remains a promise that should be translated into commitments. The government is required to work on each project with the donor country. Grants provided should be approved by the Council of Ministers, and loans should be discussed one by one and enacted in the Parliament.

The World Bank pledged $4 billion as soft loans that will be distributed over the course of five years. It is a record for a single largest financial aid package to the country.

The EU promised €1.5 billion ($1.83 billion) in loans, and €150 million ($183 million in grants to subsidize interest dues on these loans. Christian Danielsson, Director General of EU said: “With the external investment plan we broaden our support to generate up to €1.5 billion of investment until 2020.”

The European Bank for Reconstruction and Development (EBD) pledged €1.1 billion ($1.34 billion) in soft loans to be implemented within six years.

The European Investment Bank (EIB) promised €800 million ($976 million) in soft loans to be distributed over a period of five years.

Saudi Arabia renewed a $1 billion pledge to the country as soft loans, which was previously been put on hold. The Kuwait Fund for Arab Economic Development announced it will provide $500 million in soft loans. Qatar pledged $500 million to be distributed over five years.

The Islamic Development Bank promised $750 million in loans, to be transferred within five years.