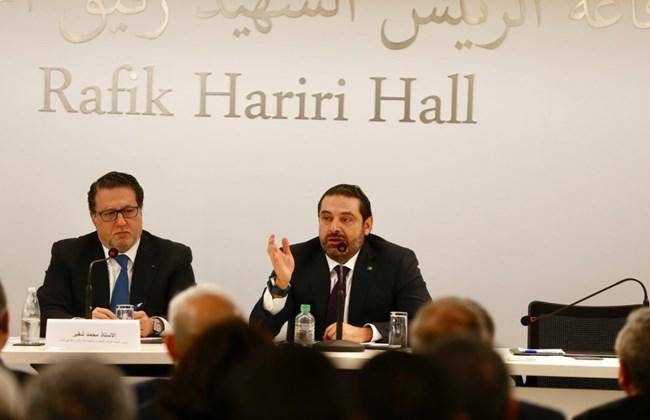 Prime Minister Saad Hariri pointed Monday to the need for information and technology investment, noting separately that Lebanon has $16 billion-worth of projects across various sectors for which it hopes to secure funding at upcoming donor conferences.
“As a government, we are working on information and technology, which is forgotten in Lebanon – it was not present before [our current government],” Hariri said, during a Q&A session with businessmen and women, held at the Beirut Chamber of Commerce and facilitated by the Socio-economic Council.
The government, he said, must “take [its] hands off this sector and let the private sector take over.”
He added: “No one, no one in the world still has this sector centralized.” Before his government took office, “people were looking to make 50 cents here or there,” he said.
Hariri said that, during the presidential vacuum Lebanon experienced in recent years, there had been enough fiber optic cabling installed in the country to service Lebanon, Syria and Iraq together, but that poor administration had hamstrung efforts to capitalize on the existing infrastructure.
Of the $16 billion-worth of proposed projects aimed to boost the country’s economy, infrastructure and security, $7 billion – or 40 percent – will be eligible to be implemented under the recently passed Public-Private-Partnership (PPP) law, Hariri said.
The World Bank has stressed the importance of the designated projects, the prime minister said. A conference will be held Feb. 28 to discuss the PPP potential of these projects.
“I know this is a big project, but as Lebanese we always think big, and Rafik Hariri always thought about how to make Lebanon – which is small – visible in a world that is big,” Hariri said.
Real reforms will require a great deal of effort, he said. “In the U.S., for every new law that is made, an old one is voided,” Hariri said. He added that factors hampering the country’s development are the “1.5 million Syrian refugees in Lebanon” and the difficulty of exporting Lebanese goods due to the war in Syria.
Asked about the agricultural sector and the weak economy in north Lebanon, Hariri voiced his support for a comprehensive agricultural plan and for the full implementation of an “anti-dumping” approach. “Dumping” refers to the practice of other countries injecting into the Lebanese market products that have remained unsold at home.
Turning to the issue of political squabbles that might negatively impact the country, Hariri said he was eager to unite opposing sides, “ensuring that disagreements do not put the country’s situation in danger.”
Source: Daily Star
Tags: FeaturedITLebanonSaad Hariri
Share it!
Twitter Facebook Google + Pinterest Linkedin