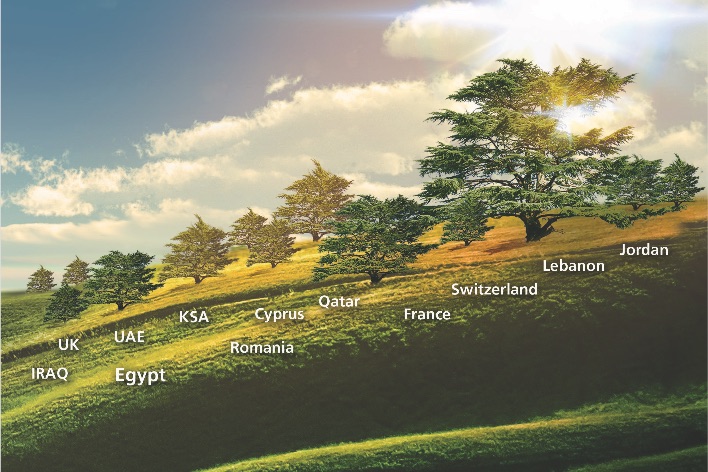 Planet Lebanon 2017 Magazine speaks to Mr. Saad Azhari Chairman and General Manager of BLOM BANK SAL to give us an insight into the Bank’s policy towards Lebanese Immigrants. BLOM BANK is sponsoring Planet Lebanon 2017 to be held under the Patronage of the President of the Council of Ministers H.E. Mr. Saad Hariri, at the Grand Ballroom Phoenicia Hotel, Beirut, on August 3rd 9:00 am to 3:00 pm, followed by a tour to the historic sights of Chouf District on August 4th,2017. Q. What is BLOM BANK policy towards Lebanese Immigrants ?

Saad Azhari : BLOM Bank’s full name in English is “Bank of Lebanon and Overseas”, so naturally we have a very active policy towards Lebanese immigrants and expatriates. We expanded to KSA in 1956 to be close to Lebanese expatriates there; and we did the same in the mid-1970s by expanding into the UAE and Europe. The early 2000s saw us move into Egypt, Jordan, and Qatar as well for the same purpose. We provide our expatriates a full range of services in all of these countries, besides Lebanon, of course, where we have special products designed for them. This policy has been quite successful, with close to 30% of our activities is derived from abroad and “Peace of Mind” is extended to all our expatriate clients.

Q. BLOM Bank is sponsoring Planet Lebanon Conference since the first edition in 2004 ? Why you choose to sponsor this event ?

S.A: There are broadly three reasons why we are very pleased to sponsor the Planet Lebanon Conference. First is the fact discussed above, which gives BLOM Bank an intrinsic motive to engage in activities that deals with expatriates. Second is the importance of the conference itself, which brings together expatriates, policy makers, and experts to discuss ways and means on how to strengthen ties between the diaspora and the mother country. Third is the fact that we are always keen to encourage functions that showcase Beirut as a major business and cultural hub in the region.

Q. BLOM BANK Products & Services range from Investment Services to Commercial and Retail Banking and Insurance. Do you have new plans to expand products & services ?

S.A: We are a full-service, universal bank that specializes in a spectrum of banking activities: commercial, corporate, retail, investment, private, and Islamic; besides capital market, asset management, and insurance services. We are also very innovative, always coming up with new products that meet our customers’ expanding financial and digital needs. One of our latest products was the recent launch in KSA of the first Smart Beta Fund in the Middle East in cooperation with MSCI Emerging Markets. In addition, we remain open to new expansion opportunities, especially those involving licenses to do commercial banking in the Gulf.

S.A: We are very proud of our CSR activities as it constitutes a very important aspect of the Bank’s mission. In fact, the Bank is considered at the forefront of CSR activities, not just among Lebanese banks but among all companies in Lebanon. In addition to “BLOM Shabeb”, the Bank sponsors the “Giving” Card, a first of its kind card that donates to the removal of mines and cluster bombs from Lebanese soil. It also sponsors the BLOM Beirut Marathon, which is the prime sporting activity in the country, and which has become a very effective forum to support all humanitarian and cultural causes in Lebanon. And it is our strong commitment to CSR that has made programs such as these a great success.

Q. BLOM BANK 2016 Annual Report is now Online ? Can you brief the outcomes of this report ?

S.A: Our Annual Report 2016, like all of our annual reports, records the results and achievements of the Bank. But in 2016 we decided to have Youth as the theme of the report, since they represent the generation that will carry the country’s future on its shoulders. It also reflects the importance that the Bank gives to Youth and to facilitating their financial and professional growth, having developed the “BLOM Shabeb” program and the Next Card – a pre-paid card which enables its young holders to use our formidable app eblom – specifically for that purpose. As to our 2016 results, the Bank earned $462.83 million in net profit, up by 14.5% on 2015; and its assets increased to $29.518 billion, its shareholders’ equity rose to $2.932 billion, and its loans stood at $7.164 billion. The Bank also attained the highest profitability ratios among listed banks, with ROAcE reaching 17.43% and ROAA 1.58%. As a result, the Bank was selected for several prominent awards from leading international institutions, like “Best Bank in Lebanon” from both The Banker and Euromoney.

S.A: The three HSBC Lebanon branches were merged with BLOM Bank on 17/6/2017, and it was a very successful operation. HCBC Lebanon brought with it $473.08 million in loans, $599.21 in deposits, and $840.60 in assets. More importantly, what it brings to us also is a wealth of experience in corporate loans and trade finance that will enrich our operations in these areas, besides introducing new ways on how to improve business/customer relations in an increasingly digital age. All this will have a positive impact on our asset consolidation and customer expansion.