Lebanon positions itself as hub for Syrian reconstruction 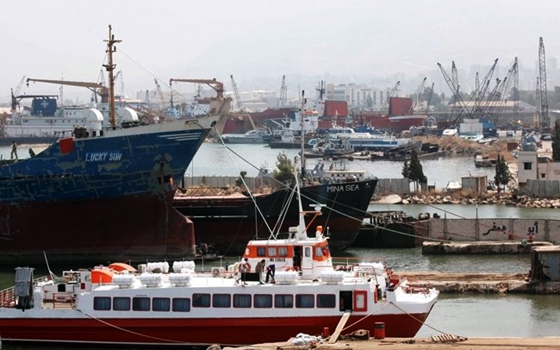 There may be no end in sight of the Syrian war yet, but Lebanon is already positioning itself as a hub for Syrian reconstruction markets once the war is over. Strategically located between the Mediterranean Sea and some of Syria’s most devastated provinces such as Homs and Damascus, Lebanon could become one of the most important gateways for reconstruction efforts.

Experts say that Lebanon has to prepare for Syria’s reconstruction once the war there ends or else it will be a missed opportunity to improve the Lebanese economy.

According to the World Bank, the restoration of Syria represents an industry estimated to be worth over $200 billion. The figure has some businessmen and policymakers hoping that the anticipated boost in multinational trade will save the Lebanese economy, which has stagnated in recent years.

Two free trade agreements, a common language and historic commercial ties are expected to give Lebanon a competitive advantage over other countries that share a border with Syria. “In the last 10 or 15 years when we started liberalizing the economy, at the time when Syria was pursuing a protective planning system, Lebanon was pursuing a free trade economy,” Nabil Sukkar, the managing director of the Syrian Consulting Bureau for Development and Investment, a consultancy specializing in market and investment expertise, told Al-Monitor.

However, Lebanon’s ability to make the most of its prospects hinge on whether it can draw foreign corporations to its shores despite its uncompetitive business environment. Currently, Lebanon ranks 13 out of 15 Arab countries on the World Economic Forum’s Global Competitiveness Index. Across the country, the government, along with international partners — including the World Bank, the Islamic Development Bank and United Nations agencies — are evaluating a number of initiatives that could spur foreign investment as well as bilateral trade.

In anticipation of lucrative reconstruction contracts, the Ministry of Industry and the UN Industrial Development Organization are evaluating the possible creation of up to three industrial zones. These zones might be established in the eastern Bekaa Valley or southern Chouf region, where local manufacturers would be well-placed to service the Damascus area.

Several other projects are being enabled through funds from a new financial instrument established in April by international donors. The Concessional Financing Facility (CFF) is meant to offer loans at highly concessional rates with a 40-year repayment window and a 10-year grace period. “The grant money that was initially received during the April meeting from the international community is put into a CFF trust fund. This will allow us to program about $800 million worth of money,” Peter Mousley, the program director at the World Bank’s regional office in Beirut, told Al-Monitor.

That money will be put to use in Lebanon’s north where World Bank funding is being used to upgrade 700 kilometers (435 miles) of roads, according to Hassan Dennaoui, a special consultant at the Tripoli Chamber of Commerce. Through this initiative, the government is hoping to stimulate job creation while laying the ground work for Syrian reconstruction activity.

Perhaps no city in Lebanon stands to gain more from Syria’s repair than Tripoli, an impoverished city that, as recently as March 2014, was the site of fierce clashes between factions on opposing sides of the Syrian war. Now, with the violence quelled, Tripoli is set to become the country’s most crucial hub for the Syrian reconstruction business and a key supply route to the devastated Syrian province of Homs, located north of Lebanon.

The potential wealth to be made from Syria’s restoration has also energized work on existing projects such as the expansion of Tripoli’s seaport. In 2012, the government awarded a contract to Gultainer for the construction and operation of a terminal at the port, and new developments are ongoing.

For his part, Dennaoui told Al-Monitor that the city is even being prepared to compete with Syria’s own harbors to the north. “There is no readiness for the seaports in Syria to host the big shipments because, here [in Tripoli], we have a depth of around 15.5 meters [51 feet] and it will be [dredged] for 17 meters, which does not exist is Syria,” Dennaoui said.

With the coordination of the Tripoli Chamber of Commerce, the seaport will work in tandem with a special economic zone (SEZ) that is in the early phases of development. The site of the SEZ, which is located next to the sea, is currently under reclamation and is expected to be finished by mid-2017.

“There’s a lot of desk work that has to be done,” Raya al-Hassan, who formerly served as minister of finance and was thereafter appointed as the chairman of the SEZ, told Al-Monitor. “Our law allows us to work with private developers. So either we mobilize funding through concessional financing by multinational organizations or we have to knock on the door of private developers, equity or loan financiers to basically provide funding no less than $30 million for the infrastructure.”

If all goes according to schedule, Hassan believes that the SEZ could be operational by 2020. Once completed, the zone is expected to play an integral role in attracting foreign corporations to Lebanon with a scheme of tax breaks and incentives, including a 50% foreign worker allowance.

Tripoli’s most ambitious project will be the laying of a 30-kilometer (19-mile) railway to the Syrian border that will be used to transport construction materials and other goods for reconstruction. Dennaoui said that the Islamic Development Bank has accessed the CFF and committed some of the $85 million that are needed to build the railroad over the next five to six years.

According to Dennaoui, the chamber predicts that these megaprojects and subsequent foreign investment could create as many as 7,000 jobs across a range of sectors, including information-technology, consulting, construction and logistics.

However, skeptics like Nassib Ghobril, the chief economist at Byblos Bank, are hesitant to put their hopes in Syrian reconstruction markets. “For the Lebanese economy, you have an obsession now: the reconstruction of Syria. We have to wait for the reconstruction of Syria and the Lebanese economy will boom again. … But you need to upgrade the infrastructure in the country regardless of what happens in Syria for a simple reason: our competitiveness is declining, and second you don’t know when the war in Syria will end,” Ghobril told Al-Monitor.

One thing that experts can agree on is Lebanon’s need to prepare for reconstruction-related activity to maximize its earnings. If the country cannot meet expectations, Syrian reconstruction could become a missed opportunity for Lebanese and Syrians alike.
Source: Al-Monitor