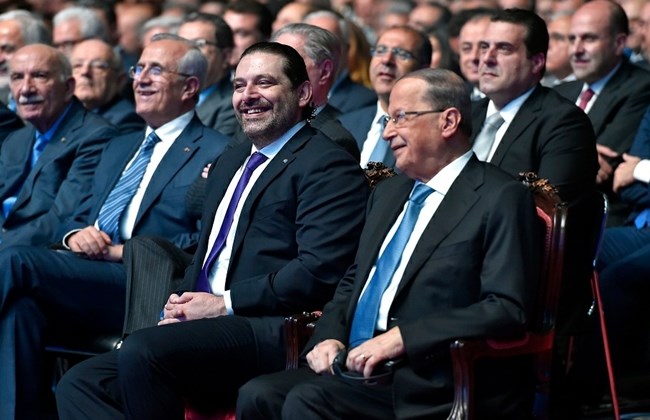 President Michel Aoun and Prime Minister Saad Hariri Thursday signed a decree that allows Lebanese diaspora to reclaim their citizenship from their country of residence.

They signed the decree following a keynote speech from Aoun at the Lebanese Diaspora Energy Conference at the Beirut International Exhibition and Leisure Center (BIEL) in Beirut.

“Lebanon’s history of migration is long and painful,” Aoun said. “People think that the path of emigration is filled with roses and jasmine flowers, but only those who have left know how difficult it is.”

“To leave for a better education or for a job opportunity is not a bad thing, but to leave for a new home and a new identity poses a danger,” the president added. “Lebanese diaspora…you might be absent from Lebanon physically, but not in its heart.”

Foreign Minister Gebran Bassil had announced the decree in his speech.

“Lebanon’s borders are the world,” the foreign minister said. “You integrated and planted seeds of success.”

Bassil said that the diaspora are “messengers of God for humanity.”

“It is your right to have MPs that represent you,” he said. “That is why we are fighting to have six seats in our Parliament to represent you, one for each continent…Stay Lebanese.”

The Lebanese Diaspora Energy Conference takes place from May 4 through May 6.

The conference was organized by the Lebanese Foreign Ministry, hoping to motivate its expat population to stay connected with Lebanon, to encourage their registration for citizenship and voting, and to invest in the country.

Felipe Nasr, a Brazilian Formula 1driver of Lebanese origin, spoke at the conference – his first visit to the country.

“In Brazil, we Lebanese and Lebanese descendants were able to make a positive difference in many different fields,” he said, adding that he will reconnect with his extended family whom he never met.

Madagascar Foreign Minister Beatrice Atallah from the Chouf village of Botmeh praised her Lebanese counterpart for organizing the conference.

“I look forward to hearing success stories about Lebanon and it’s diaspora,” she said.

Luis Abidar, a politician and businessman in the Dominican Republic who ran for the presidency of the Caribbean country in 2016, also spoke at the conference.

Previous editions of the conference have taken place, most recently in Johannesburg, South Africa, in February.

Lebanon’s diaspora significantly outnumbers the population residing within its borders.

Touring the United States, Latin America and Africa, Bassil has spoken to audiences of Lebanese origin over the past few months, urging them to claim their citizenship, register to vote for the upcoming parliamentary elections and invest in Lebanon.

“Lebanon, without its philosophy and culture, will go to the advantage of refugees and terrorists,” the Foreign Minister said while addressing an audience in Johannesburg in February.