Lebanese diaspora an asset to the country: President Aoun 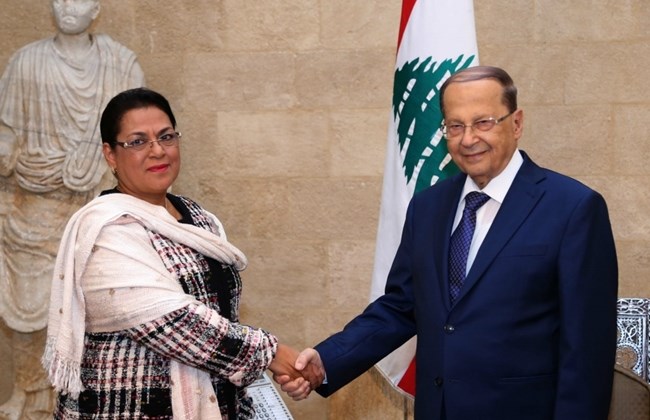 President Michel Aoun Tuesday said that the Lebanese diaspora is a “great source of political, economic, and cultural assets.”

Aoun made these remarks during a meeting at Baabda Palace with Madagascar Minister of Foreign Affairs Beatrice Atallah, who herself is of Lebanese origin.

Discussing the upcoming Lebanese Diaspora Energy Conference, which will take place from May 4-6 in Lebanon, the president said that the conference aims to “highlight the real image of Lebanon as a land of convergence and dialogue, as well as a model for the world of today and tomorrow.”

He added that this especially applies for those of Lebanese origin abroad who “hold high positions.”

Madagascar’s Minister of Foreign Affairs told Aoun that her country’s President Hery Rajaonarimampianina hopes to continue to strengthen ties between the two countries.

In November 2015, Parliament approved a draft law allowing foreigners of Lebanese descent to apply for citizenship. The Free Patriotic Movement, headed by Foreign Minister Gebran Bassil, and the Lebanese Forces were major proponents of the law. The two parties arguably represent two of the biggest Christian constituencies.

Previous editions of the conference have taken place, most recently in Johannesburg, South Africa, in February.

Touring the United States, Latin America and Africa, Bassil spoke to audiences of Lebanese origin, urging them to claim their citizenship, register to vote for the upcoming parliamentary elections and invest in Lebanon.

“Lebanon, without its philosophy and culture, will go to the advantage of refugees and terrorists,” the Foreign Minister said, addressing an audience in Johannesburg.