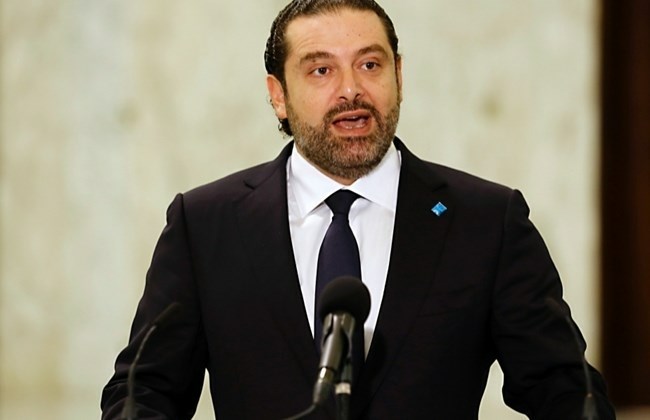 Prime Minister Saad Hariri pledged Tuesday to restore confidence in the Lebanese state and economy following years of presidential vacuum, paralysis in constitutional institutions, political divisions and tension with other Arab countries. He also reiterated his plea to the international community to help Lebanon cope with the dire economic consequences of hosting over 1 million Syrian refugees whose presence is straining the country’s ailing economy and weak infrastructure.

“Our duty is to regain confidence after years of constitutional vacuum, deadlock in institutions, ‘vertical’ political divide [between rival leaders], tension in Arab and international relations and bleakness in the economy and investment,” Hariri said in a speech at the “Business and Financial Forum: Regaining the Trust” conference held at the Phoenicia Hotel in Beirut.

“The election of the president and the formation of the government were the first step on this long road. After that, the government has taken rapid steps toward regaining confidence by adopting vital decrees and postponed decisions, last but not least of which was the approval of the budget after 12 years of absence, that is 12 years of absence of accountability and transparency,” he said, referring to the Cabinet’s endorsement last week of the 2017 draft state budget for the first time in 12 years.

Organized by Confex in collaboration with the Central Bank, the forum was attended by a number of ministers, Central Bank Gov. Riad Salameh, bankers, economists, businessmen and experts.

Hariri recalled that restoring confidence was the motto of his 30-member Cabinet formed in December.

Reaffirming his own confidence in Lebanon and the Lebanese, Hariri called for bolstering national unity to protect the country from the reverberations of regional turmoil.

“This confidence is unlimited so let us work together for the interest of everything that brings us together. Let us prevent the return of divisions and enhance our national unity to protect our country in this dangerous region, to regain confidence in our state and economy and make sure that the Lebanese citizen gets the decent life he deserves,” he said.

Hariri stressed, however, that regaining the people’s confidence required the reactivation of public institutions and administrations by appointing qualified people, fighting corruption and punishing corrupt employees. “And this requires the activation of regulatory bodies so they perform their duties based on the rule of law and the honest judiciary.”

The prime minister noted that the Syrian refugee influx into Lebanon – 1.5 million people according to government estimates – is putting “pressure on the state’s ability to ensure basic public services to the Lebanese and doubling the pressure on the infrastructure, which is already exhausted.”

“We cannot regain confidence through a signature, a decision or a political moment, but we can start to show the Lebanese and the world that we understand the problem and have the solution,” Hariri said. “This is what we did exactly. We prepared a unified vision of the Lebanese state and presented it during our Arab and international meetings including the Brussels conference that was held last week.”

Last week, Hariri visited France, Germany and Brussels as part of a three-nation European tour aimed at drumming up financial support from the international community to help Lebanon deal with the Syrian refugee crisis. Addressing the Brussels conference on Syria on April 5, Hariri urged the international community to invest in Lebanon’s infrastructure and public services. He described Lebanon as “a ticking time bomb” as a result of the influx of such a massive number of refugees.

International donors at the conference made a collective pledge of $6 billion for Syria and neighboring countries hosting Syrian refugees.

Hariri pointed out that while the government would gear its efforts toward achieving economic growth and creating job opportunities for the youth, “the international community should recognize that Lebanon is offering a service to the whole world, and shoulder its responsibility in this field.”

Hariri said that President Michel Aoun’s recent trips to Saudi Arabia, Qatar and Egypt, and his own visit to Riyadh, as well as their participation together in the Arab summit in Jordan last month were aimed at “enhancing confidence with our Arab brothers.” “Soon, we will hold the first meeting of the higher Lebanese-Saudi committee in Riyadh. We are working on several resolutions and agreements that will be announced during this meeting,” he said.

Lebanon’s ties with Saudi Arabia soured last year following the kingdom’s suspension of $4 billion in grants to the Lebanese Army and police over perceived “hostile” stances linked to Hezbollah and Iran at Arab League and Islamic meetings. Saudi Arabia and other Gulf states warned their citizens against travel to Lebanon in what appeared to be a punitive measure over the Lebanese government’s perceived pro-Hezbollah policies.

However, relations between Lebanon and Saudi Arabia improved after Aoun chose Riyadh for his first visit abroad after taking office in October, breaking the ice between the two countries. Saudi officials have promised to renew support for Lebanon, most notably through the return of Saudi tourists to Lebanon and the resumption of investment in the country.