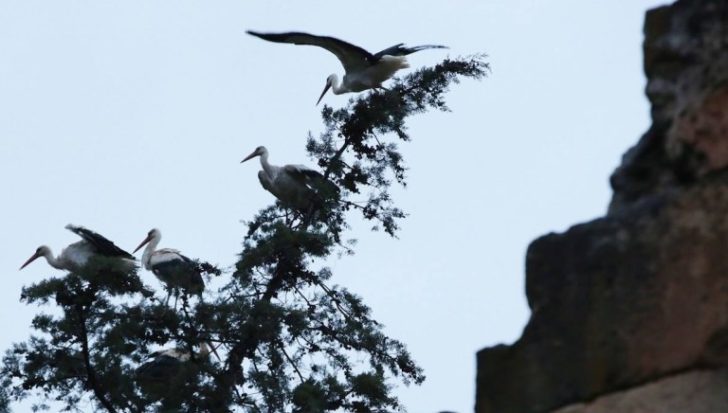 President Michel Aoun launched a new awareness campaign to protect migratory birds that cross through the Lebanese sky during the current season.
Aoun stressed that strict laws should be enforced to the fullest to prohibit hunting these birds.
Aoun’s words came during a press meeting at Baabda Palace today.
President Michel Aoun recounted his final bird-hunting trip, which took place in 1975, when news of sniper fire in Beirut made him realize that only humans kill as a hobby or out of greed and anger. On that day, Aoun began learning more about animals of the wild and had a profound respect for them.
“There should be a hunting season assigned from September to January, with the State exercising strictness in its execution,” said the President.
“There should be a peace treaty between Man and the tree as well as Man and birds, because we continue to transgress upon them.”
Strict laws that should be enforced to the fullest would prohibit such transgressions, according to Aoun. Hunting permits, which specify which types of birds could be hunted and the duration of the hunting season, should also accompany such laws.
He lamented the fact that most migratory birds were lost once they passed over Lebanon. This loss was a loss for all humanity. Migratory birds, which make an 11000 km trip across Europe, Asia, the Sinai desert and the Red Sea were subject to arbitrary hunting over Lebanon, which comprised a 200 km distance of their route. Tags that allowed scientists to study these birds proved that the majority of these birds were slaughtered in Lebanon.
“It is a shame to turn Lebanon into a wasteland without plants, trees, birds and sea animals,” Aoun added, “and cutting off trees in order to erect buildings is a major crime.”
The President called for creating natural reserves and working on reforestation.
He disclosed that he received a touching letter from the Canadian Research Center and the Sinai Observation Center, titled “From migratory birds to the President.” This prompted Aoun to address the entire nation to aid in preserving this cultural dimension of Lebanon.
Lebanon lies on the west side of the Rift valley African Eurasian flyway, which is considered one of the most important flyways for bird migration in the world. In spite of its small geographical area, at least 399 species of birds have been recorded in Lebanon. The wealth and diversity in bird species increases the assets of the country, but on the other hand amplifies our collective responsibility for their conservation.
Lebanon has come under heavy criticism from international conversation organizations over indiscriminate hunting of migratory birds, with its position on the pathway for threatened species migrating between Europe and Africa putting it in an increasingly spotlight over the issue.
Normalised in society, illegal shooting and trapping has become an extremely popular pastime in Lebanon. As a result, the mean estimated number of illegally killed birds in Lebanon is more than 2,600,000 annually. The estimated mean number of individual birds killed illegally is 248 per square kilometre each year. There are 327 species of bird occurring regularly in Lebanon, with around 59% of these being killed illegally in significant numbers.