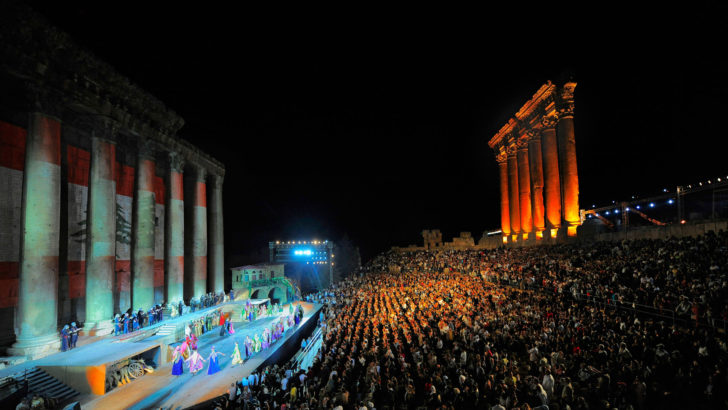 Baalbeck International Festival chair Nayla de Freige led a news conference at the Tourism Ministry Wednesday to announce the program for the 60th edition of the event, set to run from late July through late August.

Before the event begins in earnest, however, BIF will hold a festival fundraising event at Casino du Liban, where Paris-based Lebanese trumpeter Ibrahim Maalouf and his band Kalthoum will hold a concert on 15 May. Otherwise, it appears all festival performances will be staged amid the ruins of old Heliopolis.

The event will open 22-23 July with a pair of performances on the steps of “Bacchus Temple.” “Along the Silk Road,” Caracalla Dance Theater’s latest musical dance extravaganza, takes its inspiration from the historic pathway that has, as the festival’s handout says, provided “the background of many adventures and stories that have informed human, cultural and commercial exchanges between civilizations.”

The music returns on July 30, with a one-night stand with French performer Jean Michel Jarre. This evening of electronic music will cap the musician’s European tour to promote his album “Electronica Vol.2: The Heart of Noise,” his follow-up to “Electronica Vol.1: The Time Machine.” The Frenchman’s latest is fueled by collaborations with Rone, Sebastien Tellier, Christophe, Primal Scream and the Pet Shop Boys.

Pop music will squat the steps of Bacchus on Aug. 4 when Anglo-Lebanese gold and platinum record-holding singer-songwriter Mika returns. Currently working on a new record, “No place in Heaven,” Mika’s set will no doubt be fueled by his relatively recent chart-topping release, “Boum Boum Boum.”

Just a couple of weeks later, Egyptian songbird Sherine Abdel Wahab promises to remind old Heliopolis of better days with a concert of classical tarab on Aug. 26. It’s assumed her concert will sample tracks from such affectionately received records as “Lazem A’eesh,” “Bataminak” and “Esaal Alaya.”

“Bacchus Temple” itself will enclose several of BIF’s more-intimate concerts, starting on Aug. 12 when the Bob James Quartet promises to make the old stones bop with an evening of jazz. Credited as a co-founder of jazz fusion, James has won a pair of Grammys and it’s said hip-hop artists have sampled him more than any other jazz performer. The keyboard player will be accompanied by bassist Carlitos Del Puerto, percussionist Billy Kilson and Perry Hughes on guitar.

On Aug. 19, vocalist Abeer Nehme will take the Baalbek audience on the festival’s second historical roadshow with her concert “Al-Mutanabbi … Mousafiran Abadan.”

Nehme’s playlist will trace the footsteps of Arab poet Abu al-Tayyeb al-Mutanabbi, through his various travels – from Iraq, Mutanabbi’s birthplace, to Andalusia, the melodies of Magyar Gypsies, folklore of Damascus and Aleppo and traditional tunes from Greece and Turkey. The program also includes Armenian hymns, echoes of Moroccan Sufi tunes, Lebanese music, Sardinian song and Egyptian melodies. This musical journey will be accentuated with readings from Mutanabbi’s poems.

Two days later the festival welcomes jazz fixture Lisa Simone back to Baalbek. The only child of jazz legend Nina Simone, her Baalbeck show will follow performances at Paris’ l’Olympia and the Montreux Jazz Festival. In Baalbeck, she will perform her own tunes along with covers of some of her mother’s classics.

Van Dam, Rassinfosse and Collard-Neven are renowned for their classy blend of classical, tango and jazz sounds. Expect to be seduced.